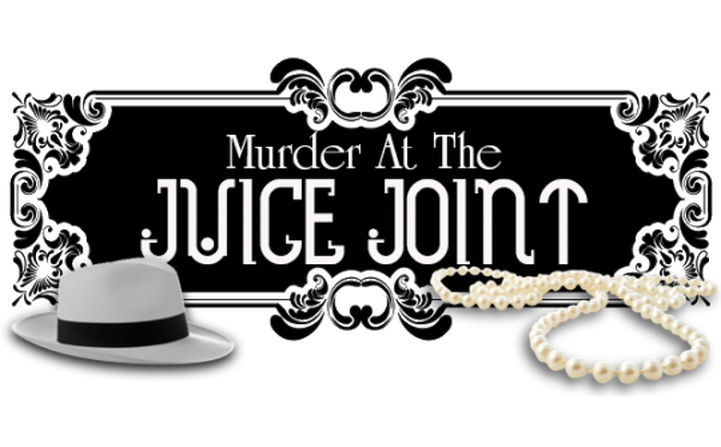 Murder At The Juice Joint

A night of mystery and intrigue in the wild and romantic era of the roaring 20's!
With the passing of prohibition and organized crime on the rise, The Juice Joint,
a swanky speakeasy run by Rosie Marie, has been nothing but jumping. To celebrate its success,
Rosie is planning a party to remember at the exclusive nightspot… and you are invited!

However, one of the names on the guest list is also on
another’s hit list… and no one is safe from the consequences.

With murder on the menu, you are certain to find a medley of individuals to
make the night most memorable. From major mobsters and their molls
to the swanky singer with her hopes at Hollywood. The cigarette girl with a
temper that sizzles to the crooked police chief with nothing to lose--
no one is safe from murder…but everyone will have a chance at solving it.

Will the culprit be the Mayor who is capable of murder?
The blacklisted bootlegger desperate to increase their sales?
Or possibly the director with a shot at making history?

With the recipe for murder, The Juice Joint will be certain
to be serving up a night of mayhem to remember.

​Step One GUESTS ARRIVE AT PARTY IN CHARACTER
Each guest receives a detailed character description in their invitation along with some background information on the party.

Step Two HOST READS AN INTRODUCTION TO THE PARTY
This explains how the night is to proceed.

Step Three GUESTS RECEIVE A PREPARED ENVELOPE WITH INFORMATION AND OBJECTIVES
Guests start mingling and verbally sleuthing as they enjoy the party.

Step Five INVESTIGATOR READS A SHORT SYNOPSIS OF HOW TO PROCEED
Guests get more info and objectives and continue sleuthing as party continues.